Mobile app developers are in demand and will be for the foreseeable future.  According to what I’m seeing in the marketplace, projects that were previously shelved due to lack of funding are now starting to get attention and funding.  Apple’s iOS is still the first target for an app’s release, with the iPhone being first, followed at a distance by the iPad.  This is despite Android’s dominance and having the market share of mobile devices, but not yet having the mindshare.  Apple is the number one brand (according to Interbrand), and everybody wants to be associated with it.   All a company has to do is develop a good iOS app; however, that’s not as easy as it was when apps first started rolling out 5 years ago. 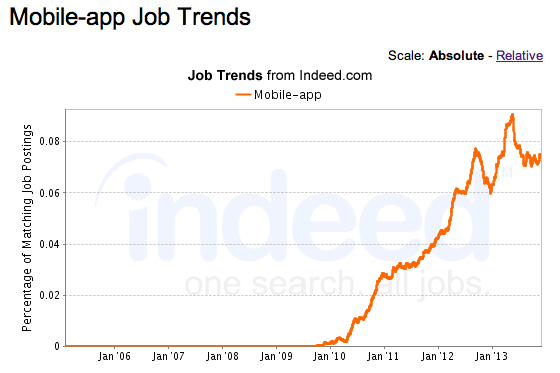 Just as the web evolved in its first 5 years, so have apps.  When the web first hit the mainstream, there wasn’t as much to work with in terms of design and functionality.  Before long, cascading style sheets came along, as did JavaScript, and web development became much more complex and featured.  The first developers who didn’t learn these new technologies were left behind.  Therefore, it’s important to hire a developer with current skills versus what worked 5 years ago.  We’re five years into apps now, and if you say the web started getting traction in 1994, we’re at about 1999 in terms of the evolution of apps.  The next 15 years carried drastic change for the web.  PHP came along, other web technologies had come and are now slowly dying (Flash), and social sharing brings with it its own strategies and tactics.  We have a lot of innovation ahead of us, and comparatively speaking, apps are not yet in their adolescence.

There is a lot of room for app growth.  I’m really excited about sensors and servos in relation to wearables and home automation.  Everything that can be measured will be measured and improved.  Right now, the San Francisco Bay Area is suffering with poor air quality.  I have an app that measures the air quality (CO) in my home, and there is a lot that I can do to improve the air quality.  There are many more gas measurements I would like to make (particulate matter, volatile organic compounds, etc.) and see if I can improve.

There is also a drought here in California.  Can you imagine gamifying water conservation?  Some people might not think it’s fun, but I would enjoy knowing what our water usage is on a day-to-day basis.  Then, I would like to know which tap or which user uses the most water at what time; after all, maybe the user is unaware of their waste?  Can you imagine an app that does that?  It’s possible today, but not without placing expensive water meters throughout the house (bearing in mind that many San Franciscans already have smart meters for their electricity usage).  Someday, these sensors may become inexpensive enough to be placed throughout the house and installed on the network, helping us find new ways to conserve water.